I've just discovered The Creation Station and I love it! They appear to have classes all over the UK and I found a local one to our part of Glasgow. I took Isaac yesterday for our first session to try it out. I'm used to taking him to loads of free things back in Carlisle run through Barnardo's and Sure Start so when I heard this was £5 per 45 minute session I thought to myself, "It better be good!" Well, it was and next week I'll be dropping £50 for 10 weeks.

It was held at a local church and run by a really nice, friendly woman. She was great with the kids and the adults as well, engaging us in conversation that never felt forced or uncomfortable during the session. I say that because I can be a bit awkward around people I don't know, especially being in a new city and a new country where I don't know anyone. So this helped me enjoy myself, too.

The session started with everyone sitting in a circle and making waves with a parachute and then lifting it up and pulling it down over us, like we used to do in P.E. as kids. I remember parachute days being the best! The session revolved around autumn leaves so a box of leaves collected from outside was dumped onto the parachute and we made them bounce around and fly all over.

Next we sat at tables and did chalk rubbings of leaves. Then we painted leaves to do prints on some construction paper. After that she passed out paper plates with the centers cut out and a hole punched in the top to make a wreath. We glued down leaves and were given other things to embellish them with (like confetti, pom poms and feathers). Lastly, we got to sprinkle some silver glitter on them. 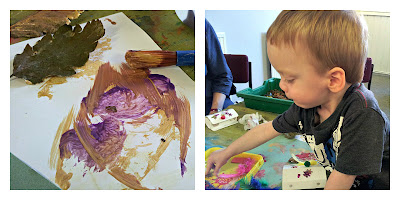 And finally, she had some cardboard binoculars to put together and then decorate.

We were constantly doing something and it all moved along quickly so Isaac never got bored. I was impressed with all that was packed into that session. 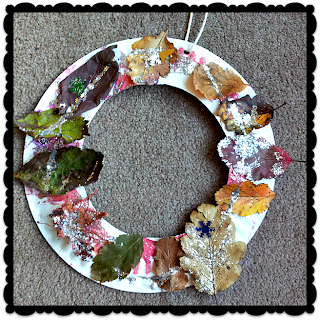 Yesterday I got out a cotbed sheet and told Isaac it was our very own parachute. Daddy joined us and we made waves with it for awhile. Then we added different sizes and colors of pompom balls to bounce around on it. The joy he got out of that was awesome. Then he decided he wanted to be bounced on the parachute! So we very carefully gave him some rides in the sheet. I think it's his new favorite thing to do.

I can't wait to see what we're doing next week!
Posted by Michelle at 12:47

American living in the UK. Mommy to a 6-year-old little boy nicknamed Izzy. Wife of an Englishman. Addicted to the Internet, music, and good coffee.

The Wasp Factory
by Iain Banks

The Lovely Blogs I Read